Whether you are here in Valencia for a short or a long stay, you’ll want to make the most of this city and all it has to offer! Here’s a quick tourist guide to a few of the main sights to see and visit … certain to make your stay in Valencia a memorable one!

Valencia’s Turia Gardens or Jardines del Turia as they are known in Spanish, are not a usual city park, but a former riverbed converted into a large green space! The park is full of playgrounds and sports facilities. The long ribbon of greenery circles around the city and offers 7 km (4.3 miles) of long terrain for running, cycling, walking, rollerblading, yoga in groups or just enjoying a picnic with your friends in the sun! Here’s the history of the Turia Gardens, if you are interested!

You can’t come to Valencia and not go to the beach! The city is perfectly located beside the sea, and the beaches are wide and long, with clean soft sand. Try the most popular beach, La Malvarrosa, which starts around the port area and is split into sections such as the Playa las Arenas and the Playa Cabanyal, eventually stretching up to the Playa de Patacona. 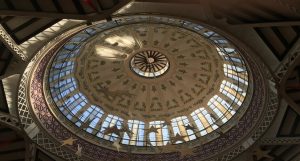 This is an important part of Valencia, always having been the main hub of trade in the city. Not only is it a great modernist building to admire, but it is also somewhere where visitors get a closer insight into the daily life and cuisine of the Valencianos. It offers an amazing variety of fruit and vegetables, spices, seafood and all kinds of meat, and it a very good way to get to know the local produce. I highly recommend it!

4. Valencia Cathedral and The Holy Grail

One of the city’s more controversial claims to fame is that it has what is supposed to be the Holy Grail, the actual cup that Jesus drank from at the last supper, although that claim is also upheld by several other places around the world. The cathedral is a lovely old place that is definitely worth visiting. You can actually climb to the top of the Miguelete bell tower and enjoy great views of the city. Inside the cathedral, the Holy Grail is one of the must-see attractions. Legend has it that the cup traveled from Rome centuries ago. However, when the Muslim rulers took over Spain, it was hidden for centuries and only returned to the city in 1427. 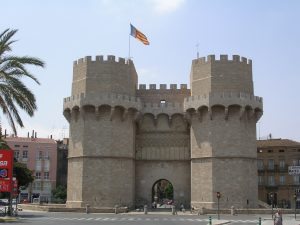 Situated in the Ciutat Vella, or the old town, Valencia’s Barrio del Carmen, the Carmen district,  was once packed between the 11th-century Muslim wall and the 14th-century Christian one. It is a neighborhood full of history, dating back over 1,000 years. The most impressive sights here are certainly the medieval towers, Torres de Quart and Torres de Serrano, both of which once belonged to the now-destroyed Christian wall. I would also recommend you to visit the Convent of Carmen, a church and museum dating from the 13th-century where you can also attend different concerts of classical music, flamenco, and music of other styles as well as chill out with some food and drinks in the spacious garden that is part of the complex!

Tucked away down a quiet alley in the El Carmen neighborhood, this stunning medieval gateway is not on the tourist trail and even some locals aren’t aware of it! The Valldigna Gate was built in the 1400s, separating the Christian and Moorish areas of the city. It’s a cool piece of history to visit.

8. The City of Arts and Sciences 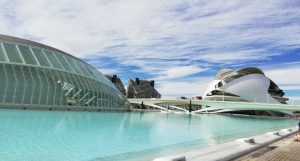 The City of Arts and Sciences is the famous complex of modernistic and futuristic buildings that was designed by the Valencian architect Santiago Calatrava. It is a scientific and cultural leisure complex that consists of Oceanogràfic – Europe’s biggest aquarium, the Hemisfèric – a digital 3D cinema, with a huge 900 metre concave screen; The Príncipe Felipe Science Museum that offers different interactive exhibitions about science and technology; Palau de les Arts Reina Sofía – the Opera house and the Umbracle – a huge, open-access garden covering more than 17,000 m2 . It’s a really unique asset to Valencia and I highly recommend visiting this attraction if you want to take some great photos!

The Bioparc Valencia, situated in the Cabecera Park, is a new-generation style of zoo. As it was created in unison with the concept of a zoo immersion exhibit, the animals are not closed in cages, they move freely in the areas of the zoo and visitors feel as if they are a part of their natural habitats; this allows them to get to know the way animals behave and interact and could even try to understand their “language”. It is like being able to experience the wild.

Valencia is so diverse and ready to be explored! If you need any more information about the city, the best areas to go to, or the top places to eat, just ask us! You can also have a look at our Activities page for more ideas on what to do while you’re here.